Flying Saucers Have Landed by Desmond Leslie and George Adamski

Desmond Leslie, an Irish polymath, links many ancient writings to tales of flying saucers. I found this fascinating. Legends from Atlantis, through Central America, the Middle East, Tibet and India were drawn out to demonstrate alien influence and UFOs. The pyramids, the flood, Sanskrit scriptures, the Bible – nothing was left unmined for source material.

Nevertheless, I was thus introduced early to a vast storehouse of ancient writings of which I was unaware at the time. And Leslie was nothing if not ingenious in his interpretation of arcane mysteries as the work of galaxy-touring aliens. Yet it was all good fun and it is eminently readable, if a little risible in places. 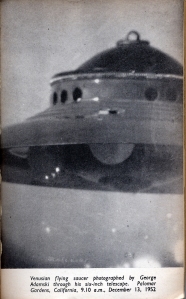 George Adamski, in a totally separate section of the book, writes a whole lot of tosh about meeting aliens, supported by a number of photographs.He describes and sketches these alien visitors and their shoe-prints (which apparently carried a symbolic message).

Adamski came to Edinburgh in 1959, and lectured in Central Hall about his acquaintanceship with Venusians, and about the propulsive mechanism of alien spacecraft. By the time that lecture took place, I had come to the conclusion that he was a fantasist about his meetings with men from Venus, but the photographs remained strong evidence for the existence of UFOs. They were almost certainly faked. Why do I say “almost certainly”? Because he had amassed a great many affidavits from professional photographers, photographic labs and witnesses who all asserted the photos were authentic.

Though many years dead, Adamski still has an enthusiastic fanbase. His photos, I now regretfully admit, MUST have been clever forgeries.

Nevertheless, he seemed a very nice man, with genuine concern for peace, harmony and the future of humanity.

And, at the end of his lecture, he very kindly signed my battered paperback.